This year’s festival artist is Kris Ekstrand, a west coast painter and printmaker. Ekstrand has been long-time Skagit County resident and champion for the arts and environment in western Washington. She has recently relocated to Petaluma, CA and writes, “In California as in Washington, I am captivated by the interplay of contrasting elements: old and new, manmade and natural, the intricate scritch-scratch of surface texture and the beautiful blur of distance.” We had the chance to talk with her about her work and connection to the Skagit River Poetry Foundation. 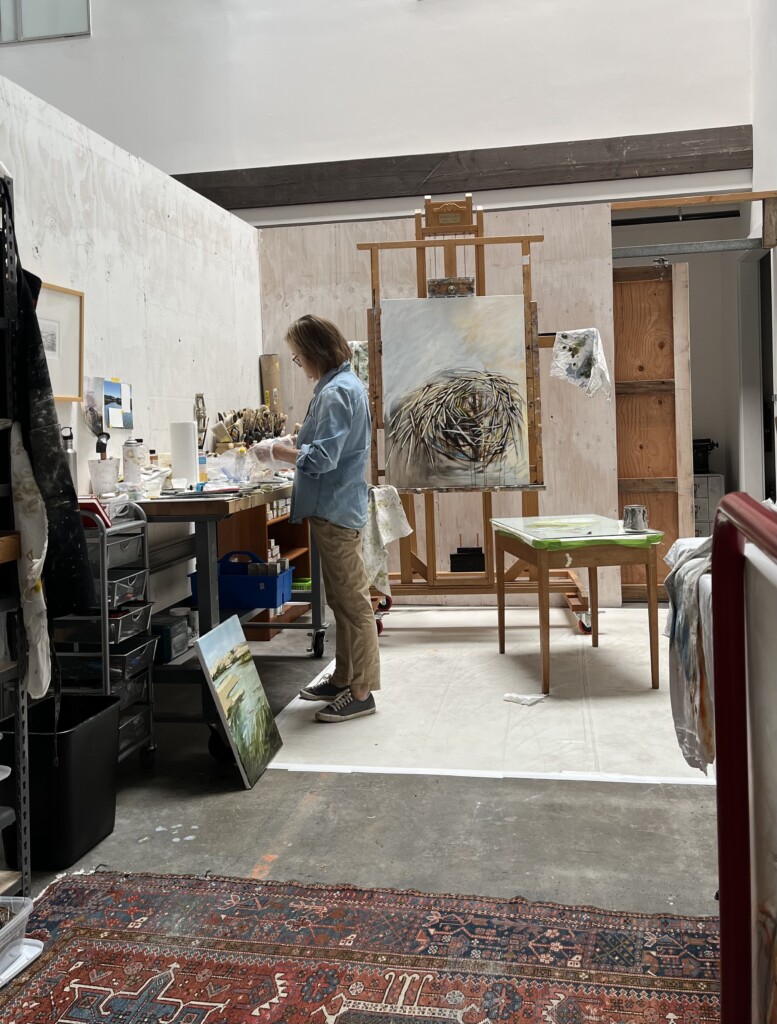 (Kris in her Petaluma, CA studio)

How has the literary world influenced your work and art-making process?

Reading, writing, and literacy have been an important part of my life and my work from the time I can first remember. I grew up in Northwest Montana, but moved to Seattle as a teenager. My high school literature teacher was the late, great Maria Steinhauser who gave a generation of Queen Anne High School students a college-level writing education during the three years we spent with her. My mother was a writer and an editor who was still working on her memoir of her Minnesota childhood when she died at 101. My husband, Carl Molesworth, has written a dozen or so aviation history books and both of my sisters are gifted writers. I have been the director of the state booksellers association, the owner of a small press, the editor of a couple of books and the illustrator of several others.

During the inceptive years of the Skagit River Poetry Festival, I was executive director of Seattle’s Northwest Bookfest, one of the country’s largest literary festivals, and we collaborated on a number of projects. My friends have been writers, typographers, book artists, and booksellers. My visual art does not refer, literally, to the written word. However, I cannot imagine observing the world around me, formulating visual ideas about it and making decisions about how to express those ideas, without an innate understanding of the written word. Painting is very much an editorial process: conception, approach, content and a great deal of taking stuff out and then putting it back in. Reading and writing have helped me think like a writer while I learn, every day, to be a better painter. I just finished reading Ann Patchett’s memoir in essay form, These Precious Days, and I was again struck by the similar experience of becoming — and being — a writer or an artist.

When I was invited to contribute a piece from my birds’ nest series for the festival’s promotional materials, I began reading work from a number of the invited writers. Wilkins’ poetry resonated with me, not just because of its references to the avian world, but because, like me, he was from Montana and I felt a certain kinship in that. My drawing, “When We Were Birds,” sprung from his writing. 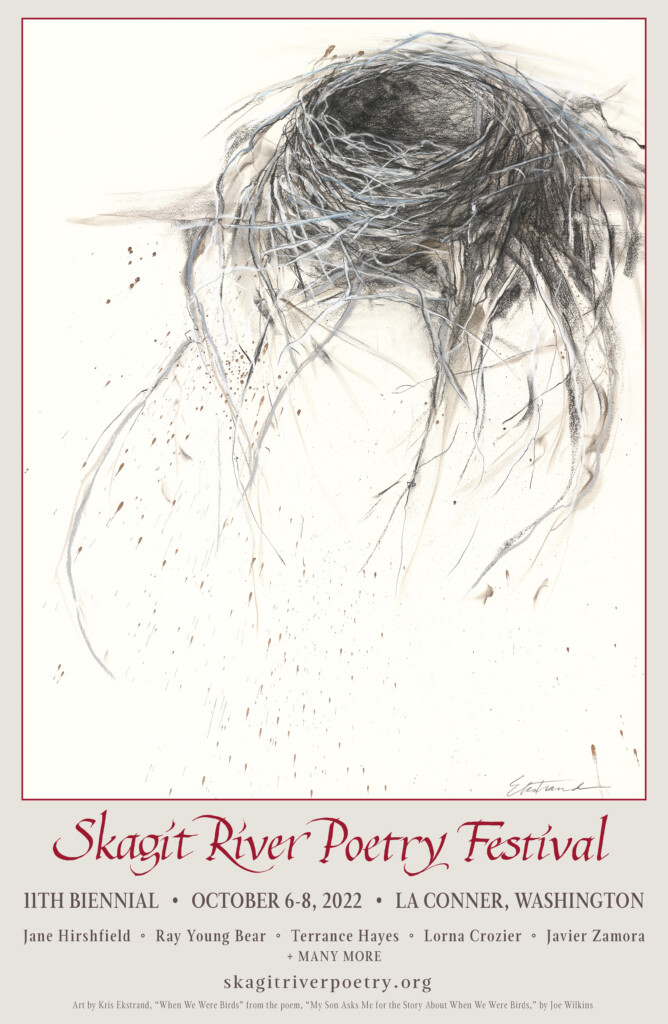 What is your art-making routine? Are you in your studio daily?

To paraphrase the painter Jack Tworkov, I go to my studio every day in order “to be there when grace descends.” After spending most of my adult life in the Skagit Valley, my husband, Carl, and I moved to Sonoma County this past spring. My studio had been situated in a little industrial building in Edison (20 minutes north of La Conner, WA), just beside the Edison Slough. Coincidentally, my new studio is in a renovated factory building in Petaluma which sits beside another tidal slough (the Petaluma River) and I usually begin the day by checking out the tide, the weather, and the wildlife along it.

I spend an hour or two doing little chores (I know writers can identify!) — putting ground on canvas, cleaning up, organizing materials and getting other peoples’ voices out of my head — then I go ahead and paint. Like a writer’s life, it isn’t just all about the painting: tracking down materials, framing, accounting, prepping canvas are all part of the craft and I appreciate that. To me, the backside of a painting stretched on canvas is an important part of the work as a whole and an ethical studio practice and thoughtful relationship with the outside world is, too. It’s all part of the art and deserves my respect.

How have you seen the arts community, including the poetry festival, develop in this landscape?

The Skagit Valley has a noteworthy visual arts legacy, but its remarkable literary history sometimes goes overlooked.  The nationally-known letterpress, typography, and binding work by Grey Spider Press under Chris Stern and Jules Faye, Clifford Burke’s writing and publishing, the stewardship of the late Robert Sund’s work, the oral histories of Peter Heffelfinger, Sam and Sally Green’s Brooding Heron list and so many others gave the Skagit River Poetry Festival a solid foundation to stand on over twenty years ago. Since the festival started in the classroom and maintained that commitment, it’s hard to tell how many young writers it has fostered and inspired over the years. And, today’s writers in the valley have worked in a richer literary environment thanks to the work of the festival, our independent booksellers, galleries, educators and others who honor and include writers. 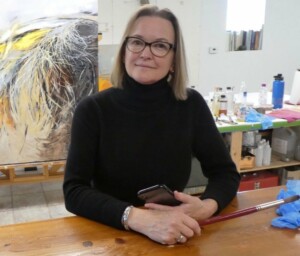 She has a show of new work at Smith Vallee Gallery in Edison in October 2022. Stop by when you are at the festival.

Learn more about the 2022 Festival & get your tickets here.