Finding His Own Form

Board Member Anna Ferdinand reflects on a recent interview with Jericho Brown in the Bennington Seminar Series. 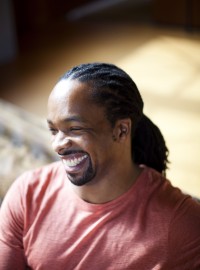 In this far-reaching interview, Jericho Brown, a National Book Award finalist and a returning poet to this years year’s poetry festival, sat down with the Mark Wunderlich, director of the Bennington College MFA program.

“I don’t think that’s my job. I ain’t out here trying to determine my audience, I’m writing the best poems I can write.  I’m trying to lose my mind when I write poems. I’m putting my entire life on the line for my poems and i’m hoping that that  yields everything I know about language.”

Having learned the form, he has gone on to subvert the forms.

For example the Elizabethan sonnet, he describes as an Imperial form. It “wants to own the world.”

”The sonnet is the supposed achievement for the poet…That is the language I grew up speaking, that is mine, so I’m always fighting against this thing… I am american, everyone should have this condition, but it is definitely the condition of being a black American, like, ‘we don’t want you, you’re mine.’”

In his latest book, he includes “all of the things we think of as the basics.”

While working with the traditional forms,  he goes on to create a new form, and calls it the duplex.

“Then I thought, if I cut all the meat out and get to the next line, I have a Ghazal!”

He describes to students from the low-Residency MFA program how, in his process, the crown, becomes a ghazal – a couplet with specific rules- and “in order for that to work, I would have to animate it with the blues.”

Form, he says, allows for music. “So, that’s probably my attraction to it,” he says.

There is also some math involved, he explains. For example, in an extremely methodical fashion, he takes all his old poems that didn’t work, cuts them up and labels them, categorizing them into ziplock bags: a baggie of iambic pentameter lines or lines about his mother, lines about making love, lines of 9-11 syllable longs.

He then will place lines next to each other, and waits for the “ohhhh,” which always takes at least a few attempts. “Then I use juxtaposition to get at the middles.”

He describes testing lines as derivatives in math. All the duplexes are from lines of his own from old poems.

“Nothing is lost,” he says.

After questions from the audience, Brown signs off with this final thought for the gathered writers (one of whom is Jourdan Keith, Seattle’s Civic poet, also in this year’s line-up at the festival.)

“Stop showing your poems to people who don’t want you to write,” he says after a question about how his parents viewed his poetry. “Stop sabotaging yourself. You get to lose your mind.  This is your opportunity to be as crazy as you are. Be that crazy. Write your ass off,” he says.

“I think that’s a fantastic note to end on,” says Wunderlich.

A poem is a gesture towards home

It makes dark demands I call my own

Memory makes demands darker than my own:

He was fast and awful, tall as my father

Steadfast and awful, my tall father

Light rain hits easy, but leaves its own mark

No sound beating ends where it began

None of the beaten end up how we began

A poem is a gesture towards home