Classroom Visit From a Poet Laureate 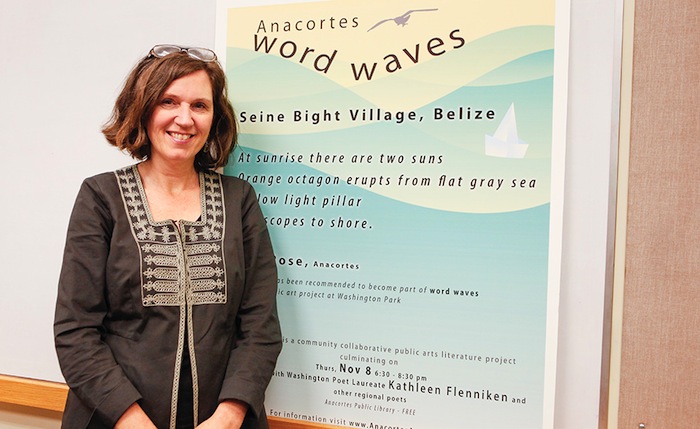 “This dance turns your eyes into rivers and tears into streams.”

“This booth is still full of wood scraps given new life through a carver’s hand.”

“The color of the ocean is like my dad’s eyes…like a shooting star in a bright sky.”

Kathleen Flenniken, Washington State Poet Laureate, swept into Anacortes on Nov. 13 and 14, with barely enough time to catch her breath before inviting, challenging, and inspiring students in Anacortes classrooms to nurture the poet within.

Flenniken arrived under the auspices of the Anacortes Arts Festival, a partner of the Skagit River Poetry Foundation, and Anacortes arts promoter Peggy Flynn. Students and teachers alike received her the poet’s visit enthusiastically and appreciated the opportunity to play with language in new and different ways.

“Kathleen came into my room with energy and joy,” said Becky Motherwell, Anacortes Middle School bloc teacher. “Both days were a great mix of the serious and the silly, which helped to engage my students. The poems she selected as models had the same qualities.”

Terri Sommers, an elementary teacher at Fidalgo School, echoed those words and added some of her own.

“The second graders knew they were in for something special when Kathleen Flenniken entered the room. Her soothing, gentle voice calmed and drew the children into the place where they could create their own poems. Many said Kathleen showed them how to paint a picture with their words.”

Flenniken’s secret ambition is to turn the students she works with into a new generation of willing and confident readers of poetry. “I bring poems to read to them and ask them to respond. I ask ‘what do you notice,’ and bring writing activities that I hope will be playful, joyful dabbling. I try to demonstrate that word play is as fun and satisfying as it is challenging.”

Flenniken told students upfront that her life had taken two distinct paths: as a civil engineer working 17 years at the Hanford Nuclear Plant near Richland and then beginning her “writing life” as a poet, initially using images and experiences from that earlier time.

The students were eager to share their own ideas about the experience.

“It was inspiring how she turned her life experiences into poems,” Kaitlin Bisbee, an eighth grader said.

Some middle school boys had a different take on the time spent with Flenniken. Eighth grader Carson Paddock appreciated that she wove the silly and the absurd into her lesson, “She made the monkeys in my mind happy. She appreciated my dark sense of humor.” Several students noted how the examples Flenniken used were good and demonstrated that you could be funny and descriptive.

In her lesson on Portrait Poems, Flenniken showed various versions of the Mona Lisa as reflected through the eyes of other artists, cartoonists, caricaturists and those who do computer graphics and discussed how various depictions communicate something completely new and unique.

She then guided the students in writing a poem in which they direct an artist on how do a portrait of them. Walking around the room, kids remarked about how freeing this was.

“I can create a poem about how I want to be interpreted,” Clare Martin said. “We can show how we truly are, how we believe and live — our personality.”

“It opens my mind to think about things I don’t usually think of,” Dylan Fox added.

“It allows me to portray how I want to be seen, not just how I am seen,” Aubrey Costanza said.

Much was said by students about how Flenniken encouraged creativity and freed up the thinking process by use of examples.

“She showed us that perspectives can be different and that’s fine,” Lyssa Petticlerc remarked.

You shall paint me as such

My expression will be one as though I have just eaten horseradish!

When you paint me sit outside

Among the fallen trees

And drink a cup of sweet coffee…

My face will be so epic, people will look up and think of the most manly things ever…

In the background there should be a fountain

Spraying water into the basin decorated with golden flowers and vines…

The ‘what’ Kathleen Flenniken brought to Anacortes classrooms is evident. In these days of high stakes testing and common core standards, the ‘why’ comes from her own words, “Poetry relies on the same good writing techniques we emphasize in prose writing: precise, thoughtful word choice — especially verbs — detail, figurative language, a strong voice. Training in poetry improves students’ writing. It also paves the way for quicker access to their imagination and sensory impressions.”

Anyone walking into a classroom this past week saw Kathleen Flenniken working her special magic with kids. What an enlivening place to be, where the mind and imagination merged in wonderful and dynamic ways.